Travel makes the world smaller and more accessible. But some destinations still feel remote and far. Just try the grueling 19 hour direct flight from Newark to Singapore. But distances between planets in our solar system, itself a tiny speck in the vast emptiness of space, are so immense they challenge comprehension and natural intuition. We humans are products of our biology, and therefore it is often helpful to scale things down to our own physical size.

This is an attempt to create a small link between two great passions of exploration. That of exploring our local cosmos, and exploring the (more-local) cities of our world. I have therefore plotted the average planetary distances from the Sun, as great circle distances between cities on Earth. Distances are scaled such that 26,800 km (16,700 mi) is shown as 1 km. At this scale the distance from Los Angeles to New York City is around that of a city bus.

I have selected Paris as my Sun, the center of my scaled system. Paris is my wife’s favorite city, perhaps its most famous monarch was dubbed the sun king, and it is undeniably a bright, beautiful, and beloved locale. Paris seems right, and is certainly better than Birmingham or Des Moines. There may be some folks out there who would argue loudly for London or NYC. To such people I reply, “a city of love” easily trumps “the big smoke” or “the big apple”. With that settled, I plot the planets as cities some range from Paris. The distances are rough but when scaled up, are somewhere between the closest (periapsis) and furthest distance (apoapsis) of that planet from Sun. This margin-of-error permits me to select more interesting cities (and avoiding ones like Leeds). 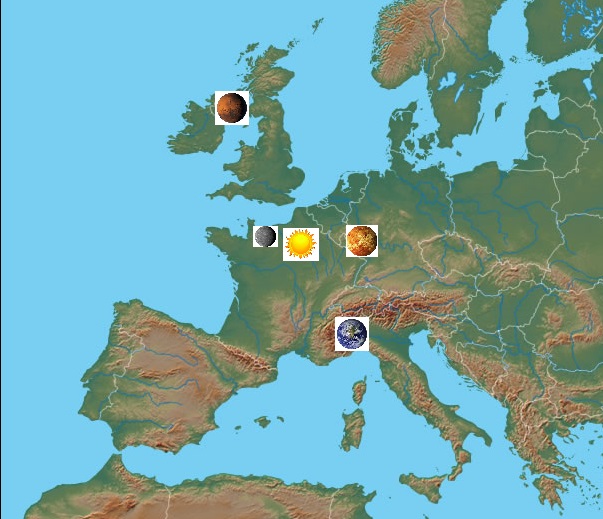 All inner planets fit nicely in Europe, in fact compared to the full solar system they are practically on top of one another. We must zoom in near France, to appreciate the comparative distances. I have placed the first planet, Mercury, at Caen, France. A wonderful town in Normandy famous for its WW2 history and surviving cathedral. We are a mere 216 km from our origin. Next we find Venus at Cologne, Germany. I have not been to Cologne but it also has a magnificent cathedral. Sadly, its town center was obliterated in WW2. Prior to this it was known as having one of the most well-preserved medieval centers in all of Europe. Our home, Earth, can be found at Turin, Italy. At the foot of the Alps, majestic and awe-inspiring, we are now 558 km from Paris. The last of the rocky-planets, Mars, is located in Belfast, UK. We are still not terribly far from Paris, just 851 km. Less than a 2-hour flight. 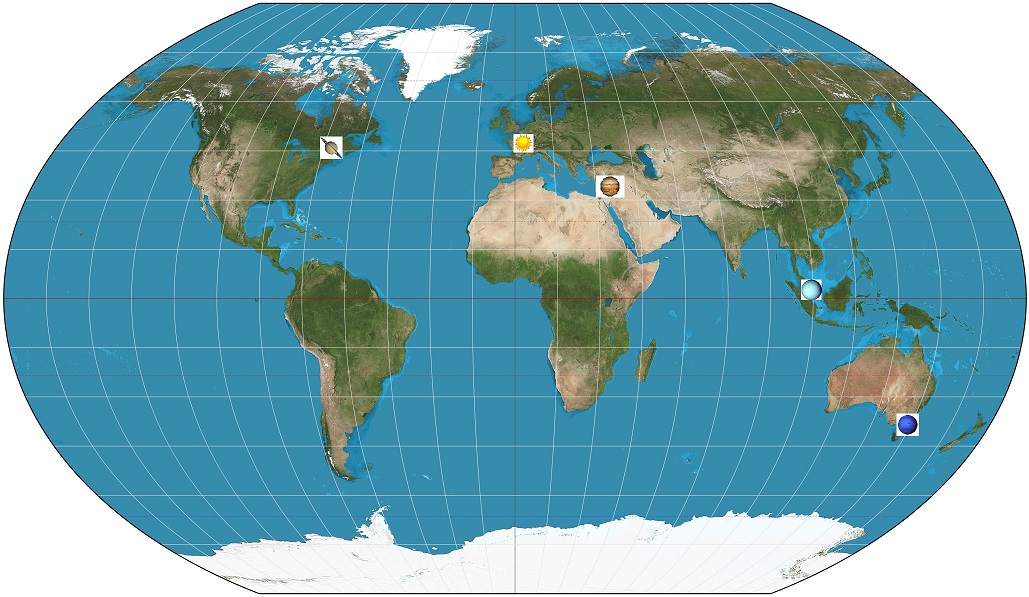 The outer planets open our eyes to the greater globe, and the distances from Paris increase by more than an order of magnitude. First comes Jupiter, mapped to Beirut, Lebanon. In parallel, the planets and cities are becoming more exotic. The inner planets are akin to neighbor countries (in Europe) or states in the US. They are very similar overall, rocky and small in the case of planets, linguistically or culturally in the case of the respective cities. In contrast, the outer planets bring true culture shock! They are massive, entertain complex ring and satellite systems, and lack a solid surface. The next giant is Saturn, to whom I have assigned Montreal, Canada. This is the only planet in the new world of the Americas. For the first time, we have traversed one of Earth’s major oceans. A journey this far alluded western people for millennia. Next is Uranus, located in Singapore. This global city in southeast Asia, is very far from Paris in many ways. Finally, we reach Neptune, at the far-flung destination of Melbourne, AU. Flying here from Paris would take well over 21 hours.